The winery has a tradition of more than 125 years; the wines from the region around Bethlehem, all the way down to Hebron, have been considered particularly good and tasty wines since biblical times; the vineyards around the so-called “ponds of Solomon” are mentioned in many places in the Bible of the Old Testament.
The grape varieties grown today are of course different from the old wines, but their quality is beyond doubt. However, people are returning to tradition and consciously classic grape varieties of the region are being cultivated again and made into wines again.
In the last few years, the Salesians’ small winery has largely switched to native grape varieties that once played a role in viticulture, but had been forgotten for many decades. Today grapes like Daboukey, Hamdani, Jandaley, Baladije asmar,
etc. again in full “use” for wine production. These grapes bring an abundance of aromas to the wines, a lively fruit and a strong volume.
Around 20 employees work in the winery. Correspondingly, many families live on their salaries.

Why Bethlehem Wine in Germany?
The question arises again and again why one has to transport wine 3000 kilometers in order to sell it in Germany, in a country that itself produces excellent wines in abundance.
This ecologically animated question is rightly asked, as it is in all cases of long transport routes.
When in 2000 Ariel Sharon created the trigger for the Second Intifada with his appearance on the Temple Square in Jerusalem, the Haram as-Sharif in Al Quds, he ultimately also created the trigger for the export of Cremisan wine to Europe. Because of the Intifada and its consequences, especially because of the rapid construction of the wall between Israel and the Occupied Territories, the monastery’s only “market”, the regional market in Israel and Jordan, collapsed. The cellars were full and the wine was no longer for sale.
But without the sale of wine, there is no income either. Without income an absolute endangerment of the monastery and all of its facilities.
So it happened in spring 2004 that an initiative from Nazareth, Galilee, encouraged us to cross the “green border” and meet the monks of Cremisan for the first time to consider how the existence of the monastery could be threatened by the export to Europe could be softened. In the course of 2004, preparations were made to be able to sell wine from Bethlehem in Germany for the first time at Christmas that year.
Over the years, which were accompanied by many painful experiences, both with regard to the reliability and accuracy of the work in Bethlehem, as well as the bureaucracy of Europe and Germany, Germany and German-speaking Europe has become a valuable and indispensable partner in maintaining the monastery and especially schools. In 2006 a comparable support was added through “The Fifth Gospel Retreat” in England, which once again supported the survival in the difficult situation.

In the meantime, the situation “on site” has changed slightly. Cremisan can sell again in Israel – but often only under very difficult conditions and only in “mixed areas”, ie where the proportion of Arab Christians is particularly high, e.g. Nazareth. The deliveries “through the wall” also depend on the daily changing arbitrariness of the soldiers, like the passage of every single Palestinian through the barriers.
That is why we are maintaining sales in Europe – because this form of solidarity is still urgently needed. Also, because in Cremisan and in all of Palestine new problems keep popping up, which in total often equalize the solutions achieved. Years ago, a part of the Cremsan site was separated from the main building of the monastery and the small winery by the construction of the wall, so that the employees were forced to work under difficult production conditions. In the meantime, the legal dispute over the course of the wall has taken on extreme effects. For 10 years now, together with the two monasteries affected, 58 families who are also affected have been trying to enforce their rights to their property in the Israeli courts, supported by the St. Yves Church Legal Advisory Service. In the spring of 2016, the Supreme Court in Israel forced the military administration to set up an alternative course of the wall in order not to separate the monasteries from one another. Then, a few months later, the Vatican recognized Palestine as a state. As a result, the Supreme Court revised its spring ruling. In August 2016, the construction of the wall in the valley of Cremisan began. It is currently stopping – we do not know the reasons for this.

The people behind the wine: 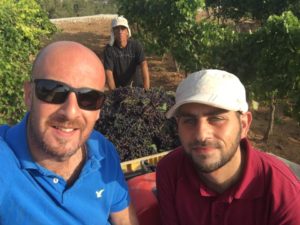